Hola from Mexico! Charlie’s 3rd Country on his adventure! Below he is wearing a traditional Mexican hat called a Sombrero.

During his time in Mexico, Charlie has travelled through lots of different environments. He has travelled through mountains in the eastern and northern parts of the country, rainforests in the southern and eastern parts and deserts in the West.  The climate varies from tropical heat and rain, to cooler mountain air and dry desert heat. In the desert Charlie found it very hot but he was fascinated by all the different Cactus shapes.

One of Charlie’s favourite places in Mexico was the Baja California Peninsula. This peninsula is the largest peninsula in the world and is over 1000 miles long. It has lots of dormant Volcanoes and over 120 species of cactus. During Charlie’s stay here he wanted to do some snorkelling with Mrs Broadway in the Sea of Cortez. He was treated to swimming alongside Whale sharks and a large pod of over 100 Dolphins. Charlie took a little boat out with Mr and Mrs Broadway and as soon as we reached the pod of Dolphins Mrs Broadway shouted lets Jump in… so we did!

However, when we reached the Whale Sharks Charlie was a little more nervous about jumping in. So he decided to stay on the boat and instead watched Mrs Broadway take the plunge. Whale sharks are large and slow moving, they can grow up to 12 meters long, that’s as long as a London bus! The Whale shark swims with its large mouth open filtering the water for food. Luckily, they only eat plankton (a type of algae).

The Plankton off the Baja coast does something really special at night-time. During the night it begins to glow bright blue. Charlie spent an evening watching this underwater firework show of flashing blue lights. It was really magical and one of his favourite sights so far.

Charlie enjoyed his time snorkelling so much in the Baja that he decided to take to the waters again on the Caribbean coast. Here he was able to scuba dive down to a coral reef. Mrs Broadway has her diving license so he was in safe hands. At first glance, A coral reef looks like it is made up of rocks but it is actually tiny animals called polyps and plants. Reefs grow in tropical warm waters and lots of tropical fish make these reefs their home. Charlie was luckily enough to see Lionfish, Parrotfish, Angelfish, Starfish, Lobsters, Stingrays and many more types of fish. His Favourite sighting was a large Sea Turtle having a nap in a cave. 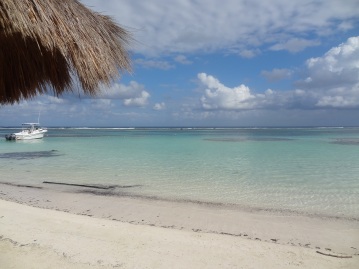 Another highlight for Charlie has been the food! He has enjoyed eating lots of delicious spicy meals. Here are some of his favourites.

Central America is also famous for its Ancient Civilizations, the Maya’s and the Aztecs once lived in South Mexico and its bordering countries. In Charlie’s next blog he will visit one of the worlds most famous temple ruins from the Mayan civilizations.

Charlie has started to learn Spanish as everyone in Mexico speaks this language. In fact more people speak Spanish here than in Spain, because many more people live in Mexico. This huge country is more than three times bigger than Spain. Here is the website that he is using to learn Spanish.