We finished the San Francisco Marathon in a respectable time of sub 2 hours, this left us with just enough energy to enjoy our wedding gift from Dan and Rowe, one we would recommend to anyone visiting San Francisco, the tour of Alcatraz prison left us all amazed. The audio tour lasts a couple of hours, and left us all wondering if anyone ever did manage to escape “The Rock”. We took in most of the other touristy sights including Pier 39, Fisher Man’s Wharf, The Haight, and Golden Gate Bridge. Another highlight was taking in a gig at the Regency Ballroom to see an English act, Jake Bugg with Dan and Rowe.   As our time in San Francisco drew to a close we both agreed that we were both becoming less fond of cities, and we both longed for the peace and serenity that being out of the hustle bustle brings.

The rest of the gang arrived 4 days later, and it was time for the road trip to begin. Starting with a 191 mile ride in the dark and cold to Yosemite Valley, arriving at 11:30pm we had just the silhouettes of the impressive landscape to accompany us. With Joe and Steve’s RV pitched and with much catching up to do, they boys managed to finish the bottle of whiskey purchased from duty free by 3:00am. On this occasion tiredness and hangovers felt worth is as it was great to see the guys and have a catch up, besides the following days hike in the valley blew out the cobwebs.

We left the stunning scenery of Yosemite and spent a night at 2000ft in altitude, our coldest yet. We woke to frost and a motorbike sluggish to start. (Probably a combination of the cold and terrible American petrol.- Some stations only stocking 87 Octane!) A days ride would take us from subzero temperatures to 40 degrees and upwards as we hit the hottest place in America, Death Valley. With Joe, Steve and family In the RV and Rowe and Dan in a sexy mustang we were spoilt for choice as to who to ride in convoy with. However, with an average speed of 50mph, Joe’s 36ft RV was soon left behind and we enjoyed sharing the road with friends, in their cool convertible. 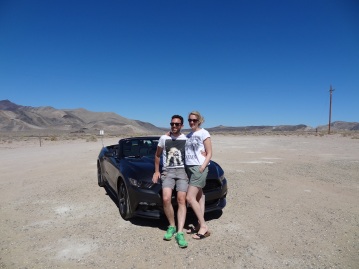 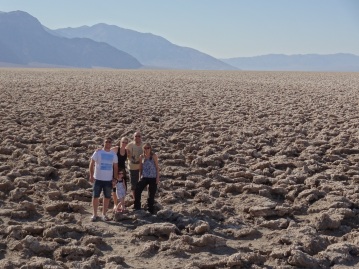 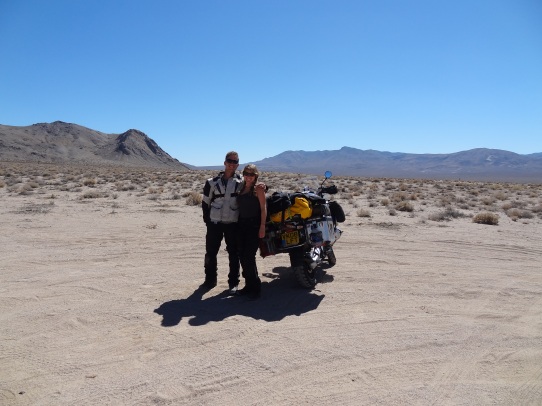 After a relatively relaxed time waiting for the guys the pace of the trip had accelerated back to the speed in which we covered Canada. Saying goodbye to Death Valley and an extremely hot bike ride it was time to hit Sin city and for us to enjoy a couple more wedding presents thanks to Steve, Graham and Justin. We traded a sweaty tent for a posh night in the Bellagio and an entertaining evening at the Cirque de Soleil. We both felt that Las Vegas does exactly what it says on the tin, given our recent realisation towards our feelings on cities we were pleased to be staying 2 nights, and our budget was too! 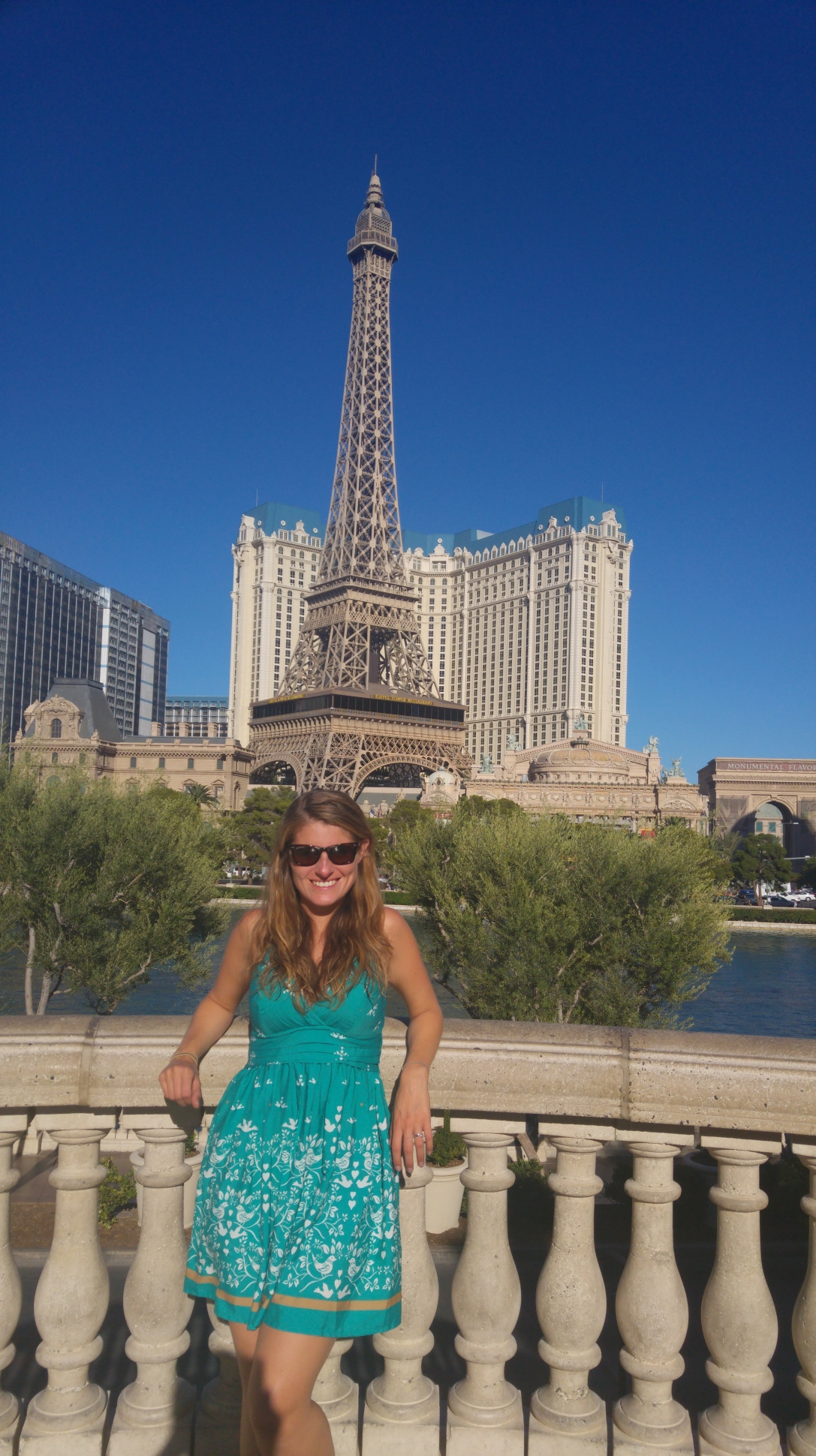 Having familiar faces with us allowed us to settle into the holiday sprit and forget about the enormity of the journey to come. In the blink of an eye Vegas was over and it was time for us to visit one of America’s most iconic landscapes, The Grand Canyon. This was done behind the wheel of our very own convertible as we allowed our motorbike a few days off in the Bellagio car park. Inspired by Dan and Rowe’s very own road trip, treating ourselves to a Camaro Soft top was easily justified. We even traded it for an hour behind the wheel in the monster RV, while Joe, Tiff and Pheobe experienced the wind in their hair. The scale of the Grand Canyon was difficult to comprehend from the ground, so we both took to the skies with Joe and Steve for a birds eye view-the only catch being… we would all have to jump out! For Tom, Steve and Joe this would be their very first Skydive, safe to say we all completed it with a smile. Particularly Steve and Lorna who had to jump first! 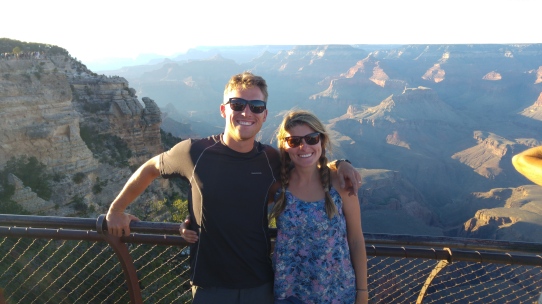 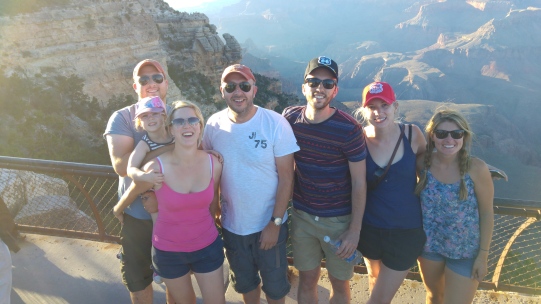 After the adrenalin fix it was time to say goodbye to Joe, Steve and family, as they had a mammoth drive to Los Angeles. We however, had a relaxed drive on Route 66 before returning the car to Las Vegas and enjoying one last night with Dan and Rowe.

Back on the bike it immediately felt like the adventure was back on and that we both agreed that 2 wheels are better than 4! We spent two days in San Diego, during our stay we were busy preparing the bike for the next leg of our trip and enjoyed spending time with some new friends. Xoong, who we met in Santa Margarita, had kindly invited us to stay at his beautiful house. He treated us to macadamia nuts grown in his tropical garden, and took us to the local brewery to meet some of his friends. One of which was Boune, also a very keen biker, Tom and Boune had a lot to talk about. After a great evening chatting and enjoying Californian IPA, Boune and his girlfriend offered to join us in our ride across the USA/Mexican border, a route they were both familiar with. We were both grateful for their offer of company and guidance, as the real adventure was about to begin.

2 thoughts on “Fun times with Friends – 3 more States and a skydive!”