Entering into Colombia from the water rather than the road was a stress free and painless experience, thanks to our captain arranging for the customs to meet us at the boat, rather than at the local port, saving us hours of waiting around.

Our home for the next 3 nights was the busy port city Cartagena, Colombia’s richest city. Similar to Panama city it really was a mix of old and new, with our focus very much on the old. We decided to team up Lise and Linus and their two motorbikes in order to help us settle into South American life. Tom and Linus had bike maintenance to do, while Lorna and Lise had plenty of research to do. Whilst sorting through our gear after 5 days aboard the Wildcard, we noticed our zip had broken on not only our very important (and expensive) dry bag, but also our tank bag. We had resigned ourselves to the fact that unfortunately both bags were going to need replacing. However, remarkably opposite the hostel was this guy, who happily repaired both for less than 2 dollars. It made us both think about how quickly we are to consider things broken and dispose of, and then replace.

Lorna also went on a street art tour which not only took in some interesting artwork, but provided a little insight into Colombia’s dramatic past.  Ran by locals, these tours are usually free, but based on a voluntary contribution. The tours usually explore parts of cities that generally do not appear in the popular travel guides but are worthy of visit. 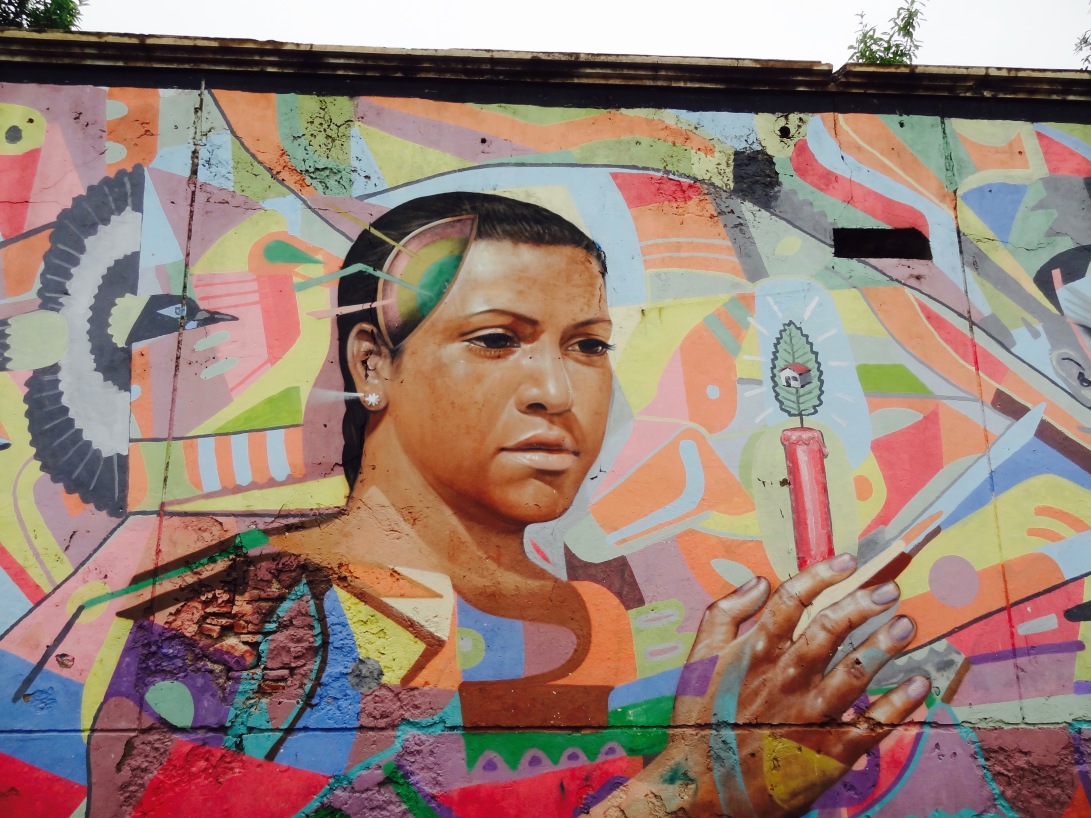 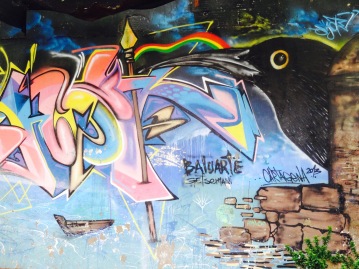 We said goodbye to our shipmates as we embarked on a very long and mountainous day to the infamous city of Medellin. We had our doubts about Medellin, once dubbed most dangerous city in the world, it is now a much wealthier, safer and friendly city. Lorna thoroughly enjoyed the city tour in Cartagena, so insisted on us partaking in the ‘Real cities walking tour’ of Medellin. We walked through downtown with a local guide, listening to facts and legends about the cities past and present. You may have heard of Pablo Escobar, the Colombian drug lord and trafficker. His cartel operated out of Medellin, and at the height of his career, supplied an estimated 80% of the Cocaine smuggled into the USA. Coincidently, our tour guide was Pablo’s namesake. A passionate and articulate guide who provided us with 3 enthralling hours insight into the fascinating and dark history of Medellin. It was obvious to us both that just 10 years ago, we would not be casually walking around this place. Also scheduled in was 2 new tyres for the bike and a much needed clean, to wash off the salty residue from the Caribbean sea. We stayed 3 nights in Medellin and thoroughly enjoyed the experience. 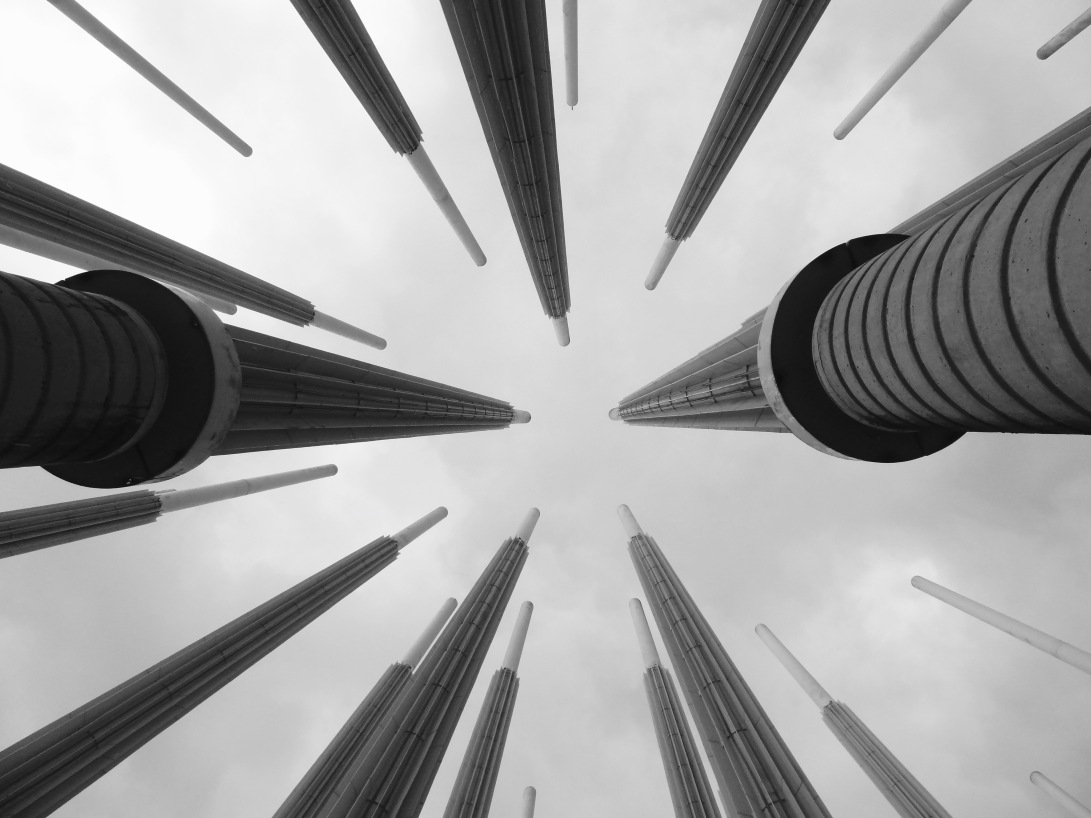 Next stop Jardin, the simple 80mile ride to our next stop was anything but that. It turned into one of our most epic rides to date as an impromptu road closure sent us on a detour that our GPS then complicated further by sending us on what would be best described as a bridleway. Muddy, steep, rocky, bendy, scary and wet! We found ourselves in the middle of the Colombian jungle, we came across a farming family and attempted to ask them for directions with our limited Spanish and hand signals. Their faces told us we were the first gringos to pass their small farm. At several points the going got so tough Lorna had to get off the bike and watch Tom slowly traverse the hardest terrain we had encountered since the Mexican desert. Inevitably, as Tom grew tired Terry was dropped, and dropped again. The last drop appearing to cause some damage, more on that later.

We both felt utterly relieved to be back on tarmac and rolling to the beautiful mountain village of Jardin. We were greeted by smiling faces at a lovely family-run hotel, who swung open their doors and allowed us to park a very muddy Terry in their lobby.

In the heart of the Coffee region, Jardin (pronounced hardine) was a stunningly beautiful cowboy town centred around its Square. Its vibrant colours and grand church kept Lorna busy snapping, while Tom enjoyed sampling the local coffee. We enjoyed people watching, especially cowboys riding their horses along cobbled streets. 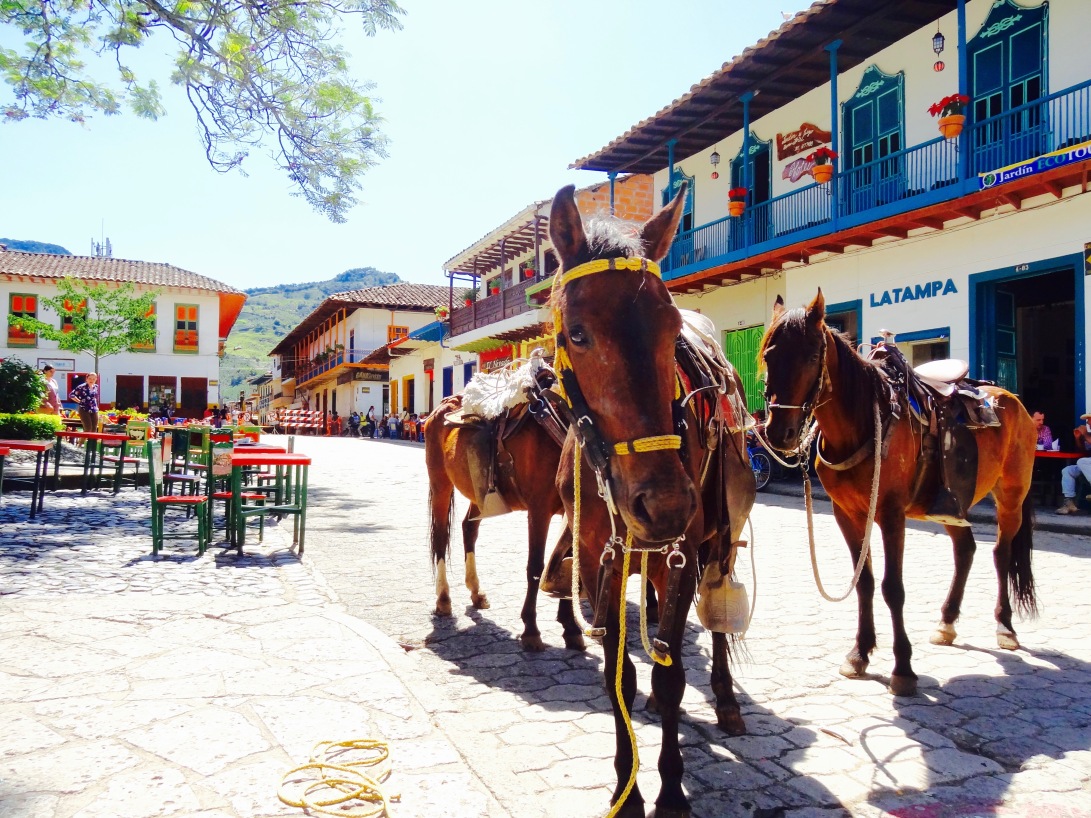 Since planning the trip we had both wanted the authentic coffee experience, at an authentic coffee farm. We rode the short distance to Salento to take a tour around one of Colombia’s Coffee Fincas. Part of the tour involved us picking ripe coffee beans, an arduous task especially considering the altitude and steep sided slopes.

We learnt about the entire process from start to finish, and safe to say drinking coffee will never be the same again.  Also near the plantations was a popular trekking route through the ‘Valle del Cocora’. The paths had us crossing over jungle rope bridges worthy of any Indiana Jones movie. We climbed up to 2,800 metres and enjoyed views of some of the largest palm trees we had ever seen. 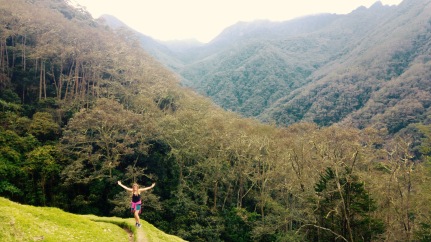 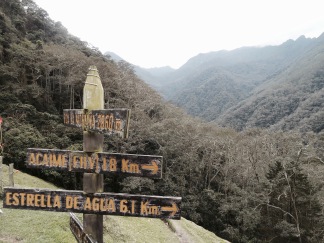 Colombia was proving to be a real highlight for us and place we would have gladly spent a lot more time, but inevitably, our time in this colourful country was drawing to a close. We rode south with an overnight stay In Pasto before a very busy border crossing into Ecuador.

Listening to the negative hype and press about Colombia whilst we planned our trip, we both had concerns about entering this country. However, upon arrival and throughout our stay we felt 100% safe and at ease with our surroundings. In fact, so much so, that we would both rate Colombia as the friendliest country visited to date. It is a country on the ascendance that welcomes tourists with open arms, we would wholeheartedly recommend this destination to anyone. 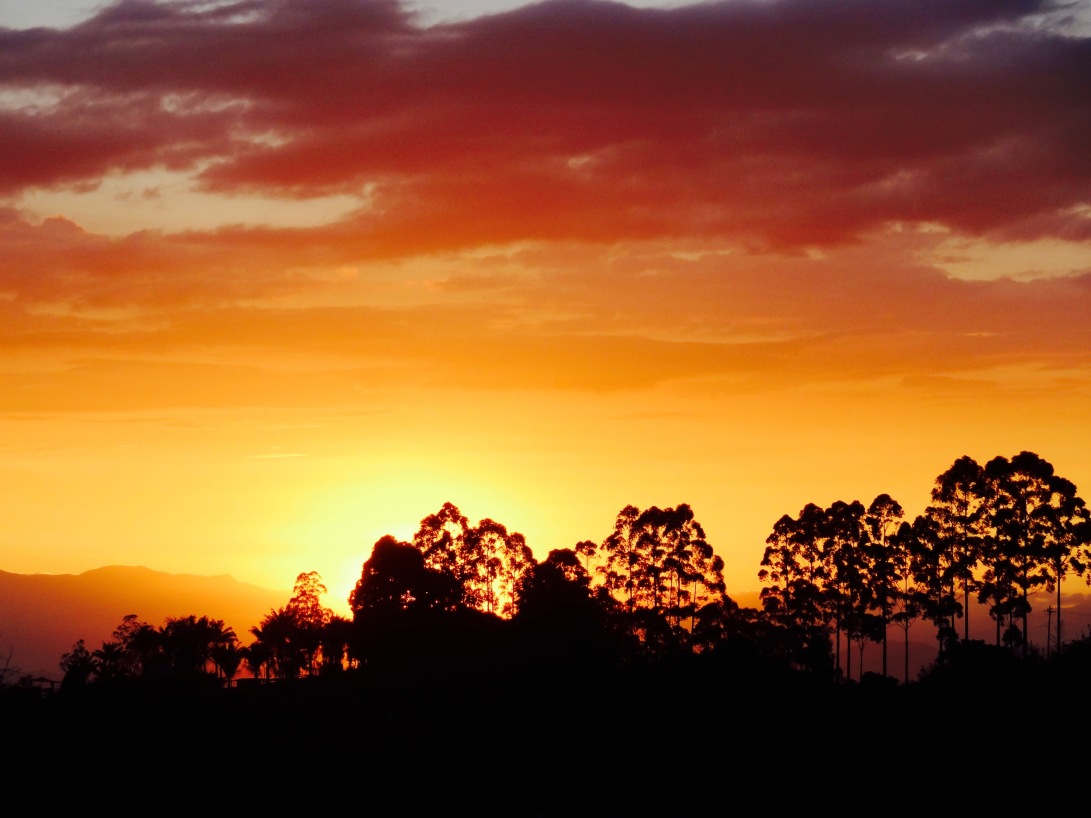 One thought on “Colourful Colombia…”