How could we top Colombia? We were both left pondering this as we crossed a busy but straightforward border crossing from Colombia into Ecuador. Exiting beautiful Colombia took less than 10 minutes, whist entering Ecuador took two hours not that it was complicated, it was just extremely busy and understaffed. Of course, by now, our experience told us to retain our patience and keep smiling, no matter how long it takes.
The currency in Ecuador is the American Dollar so it was nice and easy for us to adjust to- something that always takes a bit of getting used too.  We rolled over the border and continued South towards a landmark that would signal our entrance into the Southern hemisphere.  Excited, Tom watched the co-ordinates on our GPS count us down until we were sat on 00,00,000, better known as the equator. There was a rubbish monument that was at least 100metres in the wrong place and that was it.  We stopped for the obligatory photo opportunity and then carried on to a hotel for the evening. 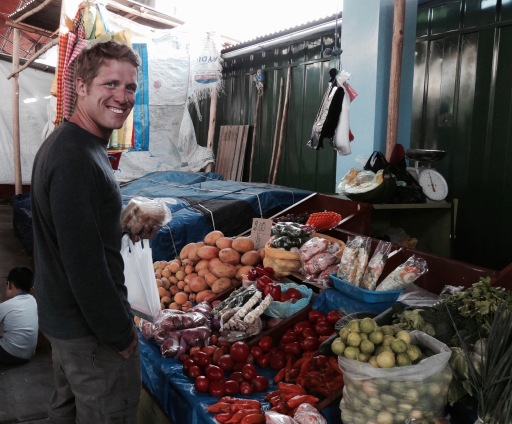 We made our mind up that Ecuador would be a country to transit through rather than to explore at any great length.  The scale of our journey and the scale of the South American Continent had us focusing on covering a few more miles in a shorter time. (Also partly due to the extra time that we spent exploring Colombia.)

The altitude in Ecuador took us over 3500metres for the first time on our trip, something that we were going to have to get used too as we venture further South and into the Andes.

The roads were fast and in great condition which allowed us to really make progress through what is one of the smallest countries in South America.

In just three days, we found ourselves at our thirteenth border crossing. It was a Sunday morning, and we appeared to be the only couple out of bed early enough to avoid the rush. We had descended from over 3,500 metres to sea level as we passed into Peru at its most northerly point. Vast lifeless and sandy deserts greeted us as our journey south was occasionally interrupted with a view of the ocean. Strong winds blew from the Pacific and made our journey challenging. 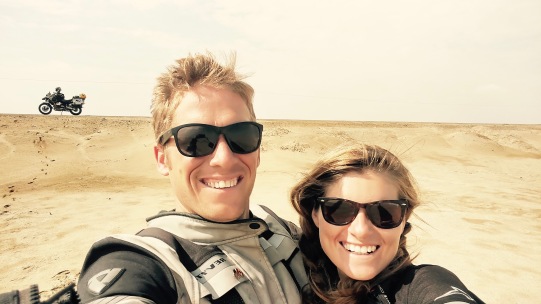 First stop was a touristy town, where we took refuge from the wind and isolation for a couple of nights. We welcomed the rest, however were not sold on this spot, as Tom had the mountains in his sights. With an early morning start, we pushed to Yungay to climb Laguna 69, a hike that would take Lorna over 4,500 metres for the first time. We were both interested to see how she would react to the altitude.

It just so happens that Lorna follows in her father’s footsteps and is quite the mountain goat taking 15,000 feet in altitude in her stride. The hike itself was truly breath-taking so was to the ride from Yungay up the mountain road, again testing Tom’s off road skills. Our early start meant that we managed to avoid the busload of paying tourists. 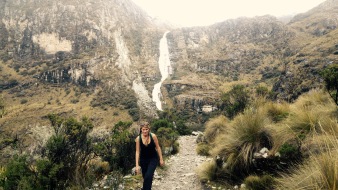 Back at the bike, we met a Swiss chap who had cycled the route which had previously taken us two hours to ride. Yet again we felt impressed by other people’s determination and desire to see the world- by any means. That night we struggled to sleep, not due to the altitude but the cacophony of stray dogs barking outside our window… It went on all night! 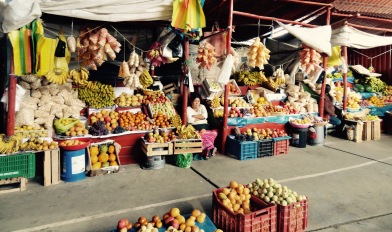 Terry was struggling and it wasn’t a reaction to the altitude. No, he was carrying an injury after being dropped several times along a certain jungle track in Colombia. (See previous post).  A mysterious oil leak had begun from the left hand side valve cover and Tom was anxious to solve the problem. We stripped the parts and reassembled but with no luck, Tom resorted to plugging the problem with a tissue.  Keen to find a more permanent solution as well as give the bike a much needed service, we took to google maps and headed for Lima- Peru’s Capital City.

The next morning, we started a stunning decent from what felt like the top of the world to a city at sea level. On route we spotted a fellow over lander in the midst of changing his tyres on the side of the road. Meet Brett, a cheerful adventurer from Texas whom we instantly hit it off with and agreed to hook up in Lima.

Arriving from rural, mountainous Peru into a hustling and bustling city was a culture shock- the city was grid locked and it wasn’t long before we both felt the oppressive nature of the traffic and pollution.  Brett joined us and the boys enjoyed a full day of motorbike maintenance.  Tom changed the brake pads, oil, filters and partially fixed the oil leak to provide Terry a much needed boost in health.

We decided to ride with Brett for a couple of days until our paths took us in different directions. Our last stop in cosmopolitan Lima was at BMW as a last ditch attempt to resolve the oil leak.  They kindly obliged us and spent an hour free of charge stripping the cylinder head and reassembling.  Pleased with what seemed to be a problem solved we set off with our new Texan friend due South to find a spot to camp.

50 miles in and a fuel stop left Tom speechless. Our left legs and luggage was covered in oil!!!  Not only had BMW failed to fix the issue it seemed that it had got a lot worse!

Just to add to our frustration we noticed a screw in our rear tyre.. Back to Lima it was!

One more night in the crazy capital city and we were back on the road South.  Tyre fixed but an apology from BMW that the oil leak was there to stay.  Tom resorted back to the tissue technique just to stop the hot oil from spraying over us as we ventured to catch up with Brett.

Since we began our trip we have not sought out company to ride with.  Yet, we have made some amazing friends just out of being in the right place at the right time.  Not all travellers or over-landers are like-minded but when you find one’s that are, then it makes for a great experience.

We wild camped the following two nights with Brett and experienced some of the wilderness that Peru has to offer.  Wild Alpacas roamed the mountains as we rode over 4500metres in altitude.  We stopped at places well and truly off the beaten track and tried to take it all in.  The culture, the harshness and the scenery was the most exciting yet.  Even the near death experience of a herd of Alpacas running into the road did not deter from the special feeling of the landscape around us.  We felt like adventurers. 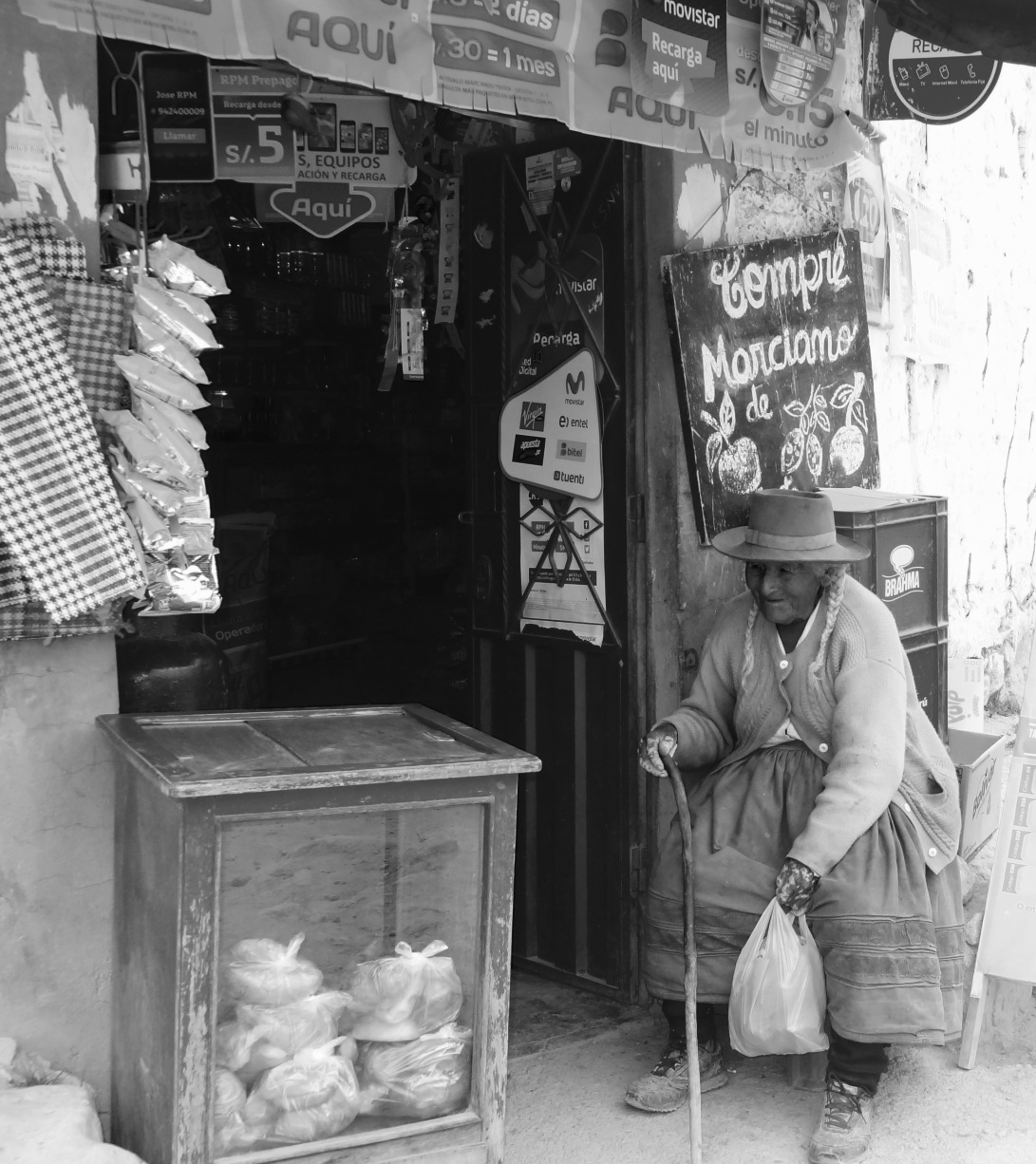 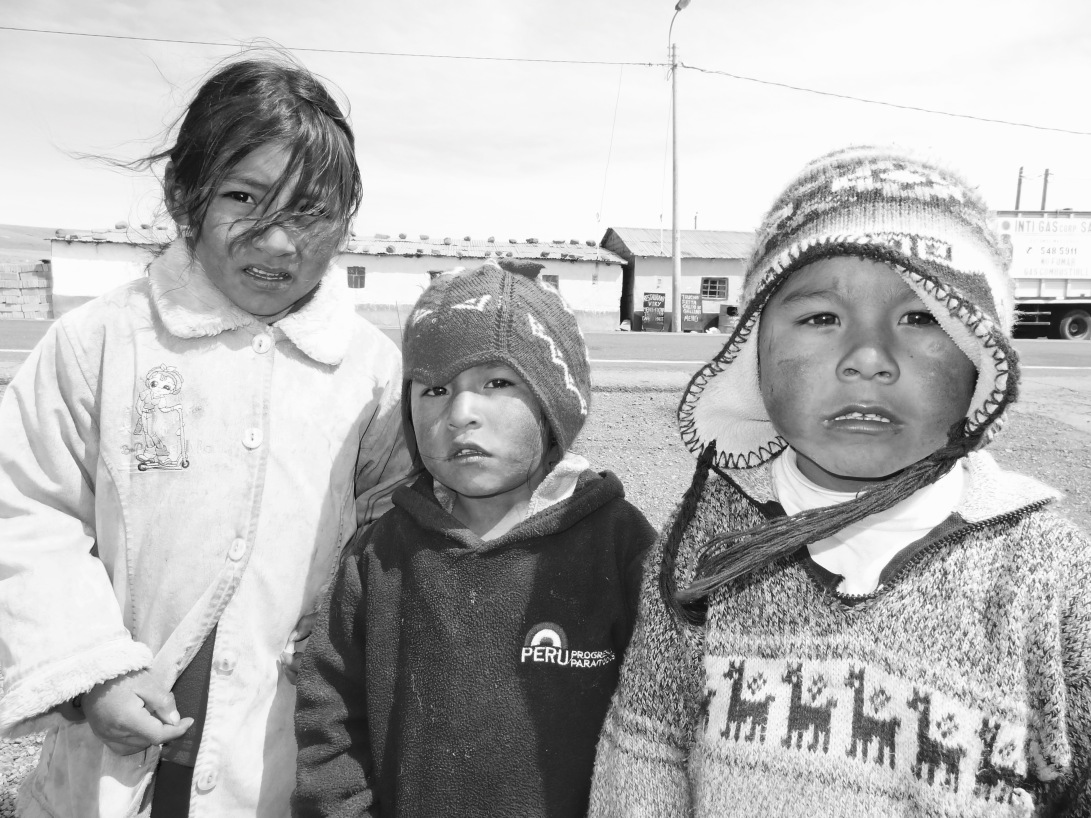 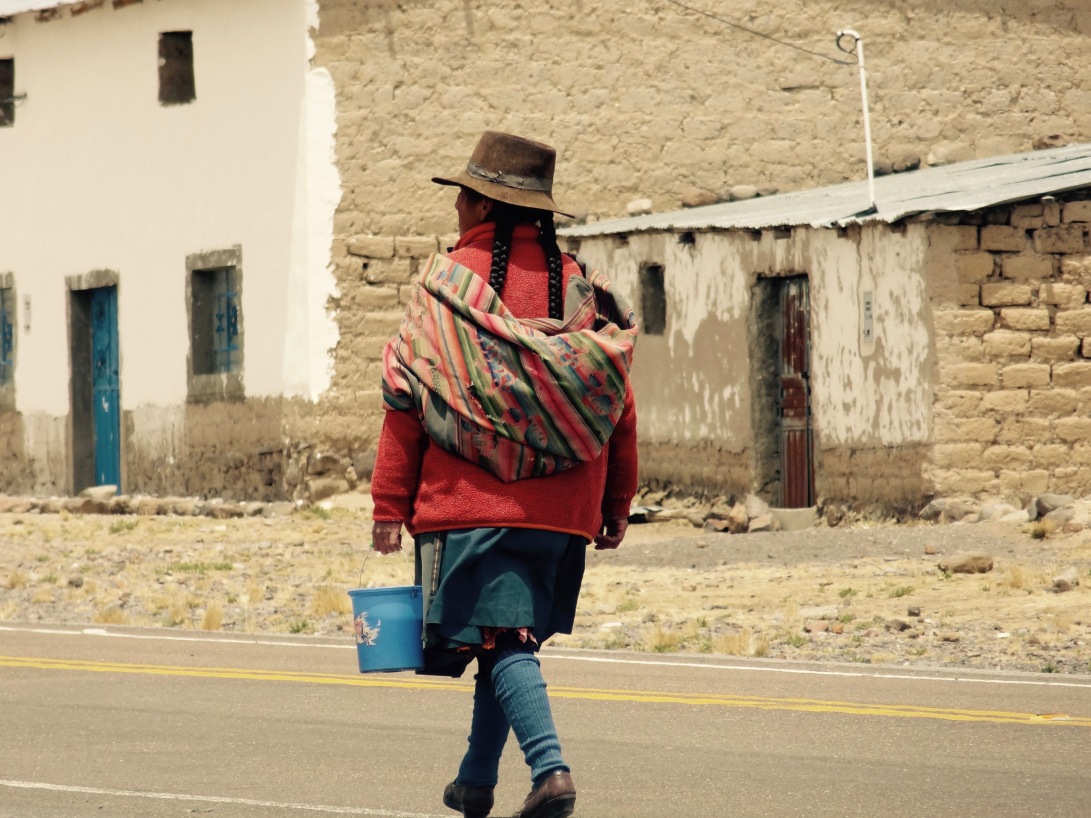 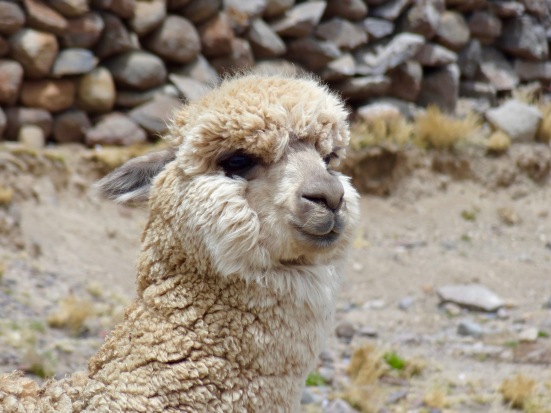 We finished our time in Peru in touristy Cusco, the hop off point for the world famous Machu Pichu.  Tom spent two days on the bike and enjoyed yet another bout of food poisoning.  The stark contrast of life in a town had us both yearning to be back in the wilderness.  However, the comfort of a toilet was exactly what Tom needed! 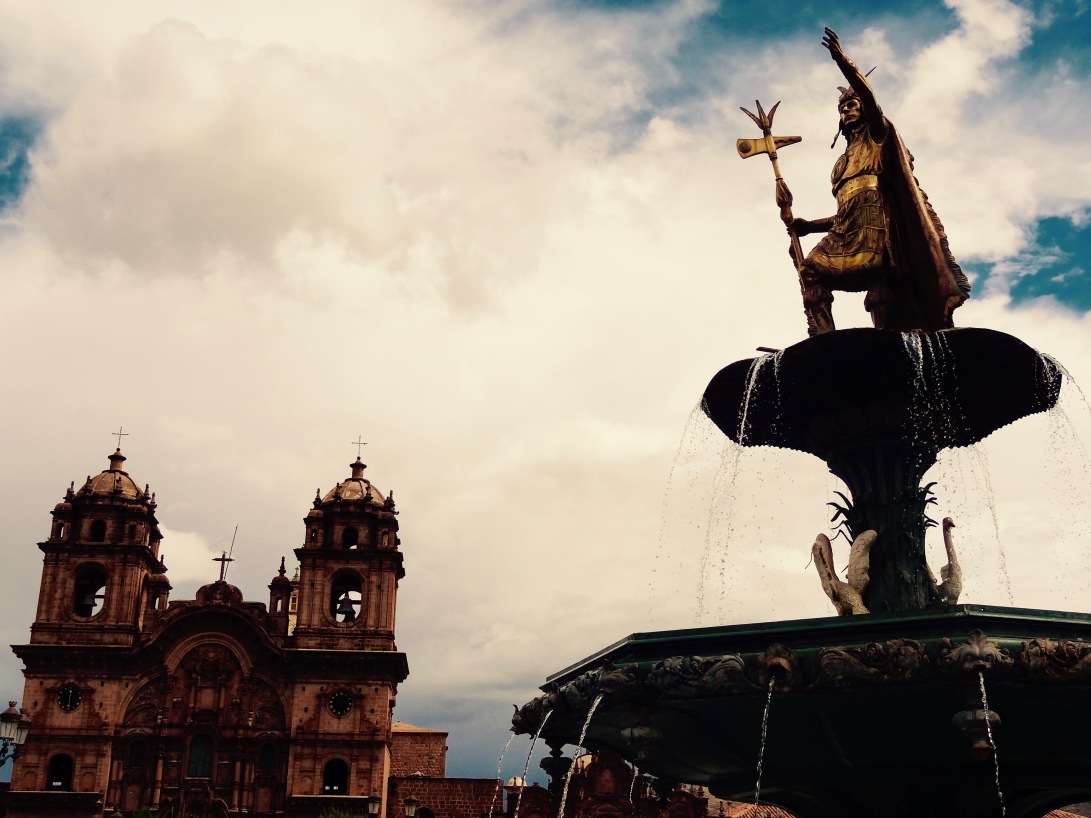 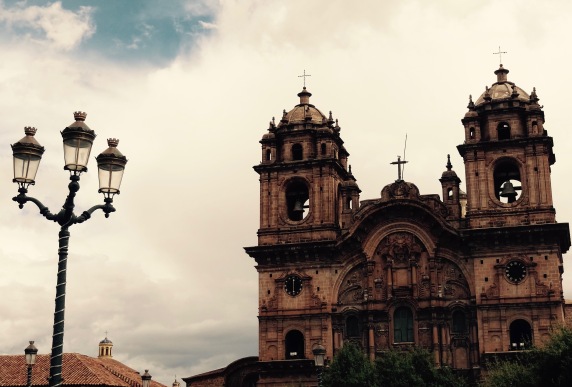 We left Peru with a bike no longer leaking oil and desire to seek out more adventure off the beaten track.. Bring on Bolivia! 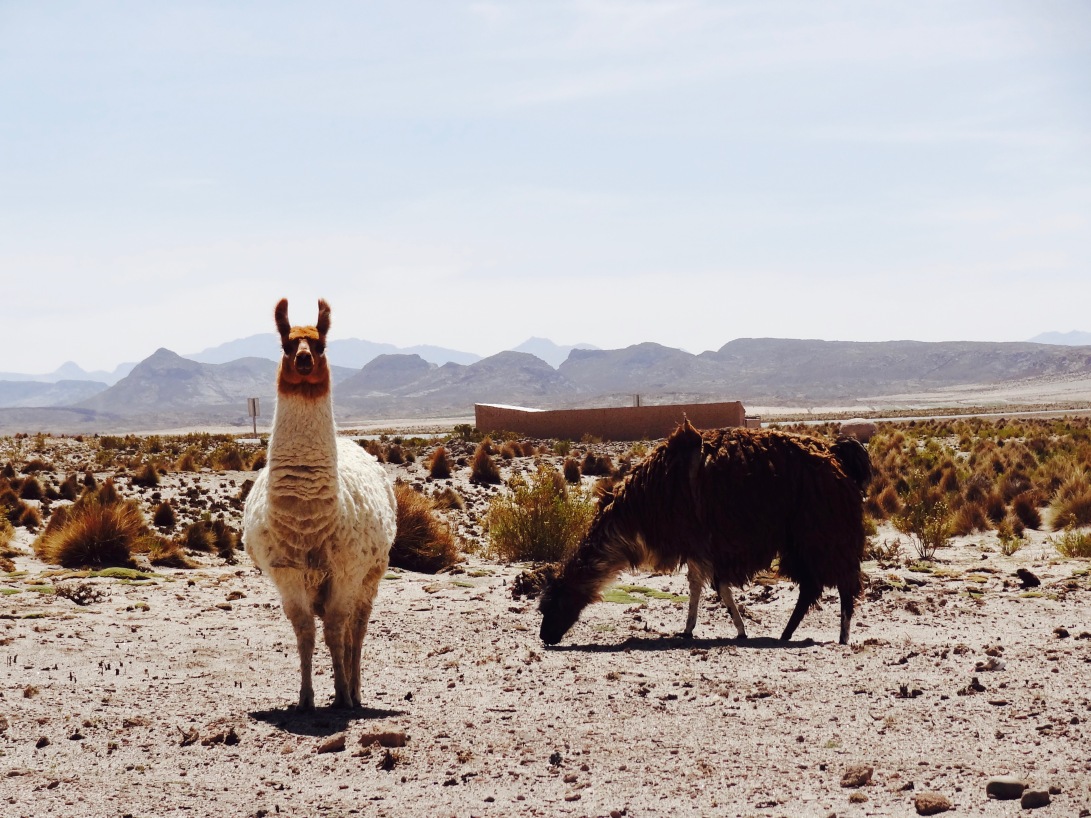